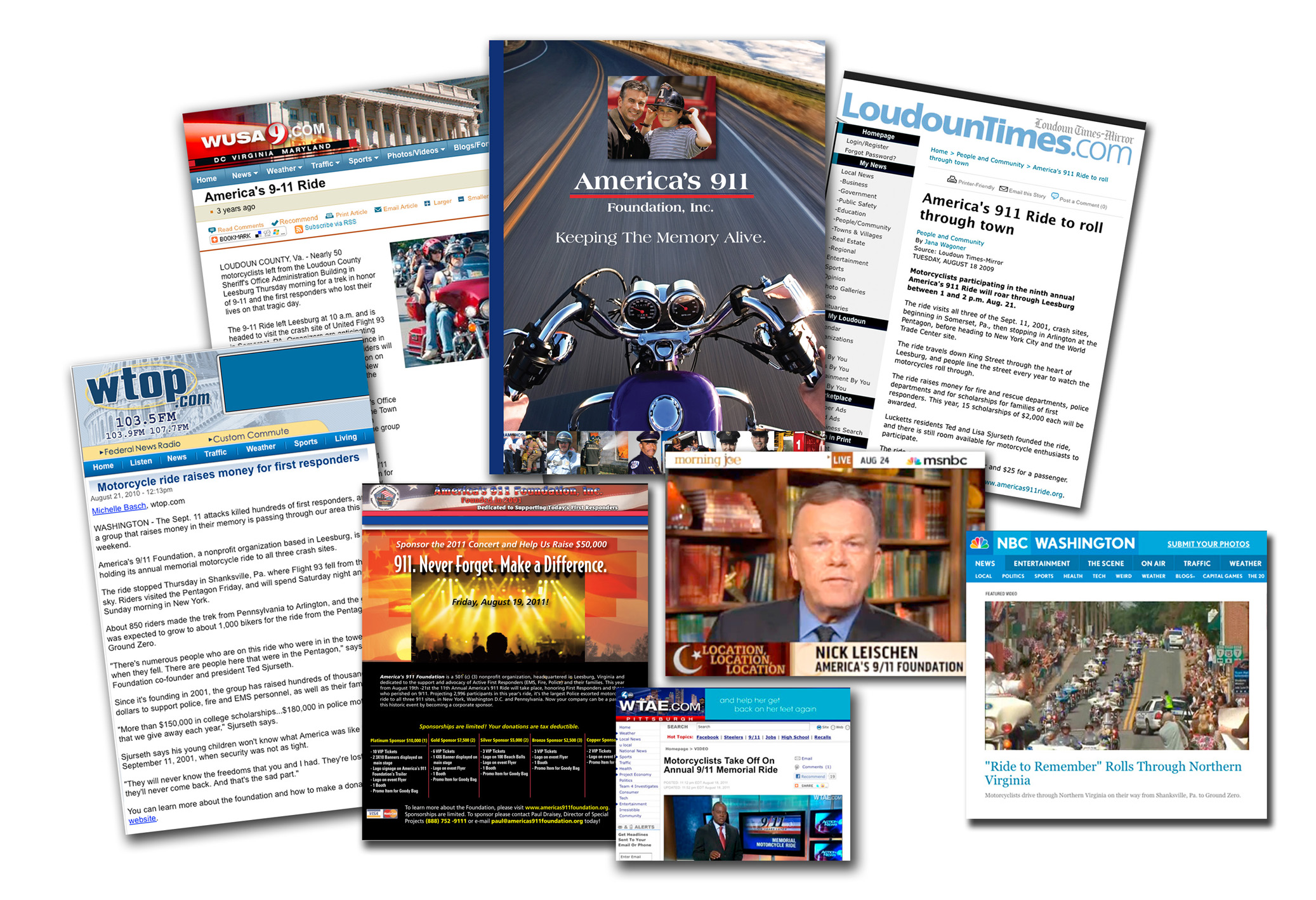 America’s 911 Foundation is a certified 501(c)(3) non-profit organization based in Leesburg, VA, and was started in October 2001 by Ted and Lisa Sjurseth in the wake of the 9/11 terrorist attacks to support Active First Responders (EMS, Fire, Police) and their families. The Foundation is active in the larger community in several ways – including awarding a college scholarship every year to a child of a first responder and also running a competition for the drawing of a Harley-Davidson motorcycle, known as the “Opportunity Bike” both made possible with funds raised from the Foundation’s annual 911 Ride occurring in August of each year and reaching the three major attack sites hit on 9/11/2001 – The Pentagon, Ground Zero/The World Trade Center, and Somerset, PA.

Over the last ten years, America’s 911 Foundation has consistently grown its volunteer base and the reach it has through its outreach programs, without any of the large network of volunteers ever taking a penny of payment/salary.

America’s 911 Foundation recognized their need to increase brand recognition and awareness, encourage participation, and spur donation to advance the Foundation’s mission and reach.

RMR suggested a comprehensive marketing communications plan that incorporated marketing, public relations, social media recommendations and vehicles to help America’s 911 Foundation to reach their goals of growing visibility and awareness for the Foundation and its work. RMR assisted America’s 911 Foundation with the rollout of strategic and focused plans to maximize visibility for the 911 Ride in August 2009 and 2010, and 10th Anniversary of 9/11 in 2011. RMR instituted a social media campaign to include strategy, writing assistance, and consultation, and ongoing consistent media cultivation and contact through core lists and scheduled opportunities published by target publications.

The RMR team reached out to the media to promote the Ride in August 2009 and 2010, and 10th Anniversary of 9/11 in 2011. RMR connected with print and web media, as well as local and national TV and broadcast media to encourage participation from hosts and anchors in the rides. The campaign averaged 30 placements per ride.

To keep America’s 911 Foundation top of mind even when the Ride was not approaching, the RMR team consistently updated the media with press releases and media alerts about the many community-centered efforts that America’s 911 Foundation was involved in. These efforts included the Foundation’s many presentations of college scholarships to high school students, and the Foundation’s trip to Joplin, MO in June 2011 in conjunction with NVET to assist with the tornado rescue and relief efforts. After follow up to their respective press releases by RMR’s media team, RMR secured news coverage by The Tribune-Democrat and The Palm Beach Post for the former initiative, and The Daily American, Fireengineering.com, leesburg-va.purzuit.com, and firstaid.consumerreports.com for the latter initiative.